Windlass out of the West: Schooner Days DLVII (557)

Full Text
Windlass out of the West
Schooner Days DLVII (557)

FRIEND JOHN A. MARSH, publisher of the Amherstburg Echo serving the Banana Belt of Canada, gives us a hail. The Fort Malden Museum, Amherstburg, whereof he is a well-deserving pillar, has received a capstan, or windlass, from the United States engineers who by international agreement look after the boundary channels in the Detroit River, Lake St. Clair and River St. Clair.

Called from Amherstburg to remove an ancient wreck, believed to be that of the schooner W. K. West, in the south-east bend of the St. Clair river, they effected this improvement, and have sent the Amherstburg museum a neat souvenir, a twelve-foot log of oak, 32 inches in diameter, weighing 1,200 lbs. Mr. Marsh would like to know about the W. K. West and the relic.

Wooden dogs, wooden pauls and wooden journals had held it to the frame supporting it on the deck of the wreck. It appears to have been the barrel of a windlass rather than part of a capstan, although capstan barrels were also made of wood in schooner days. Never knew one twelve feet high, but windlass barrels were often twelve feet long.

The capstan is a drum revolving on an upright axis, the windlass revolves on a horizontal one. Every schooner of any size had a capstan amidships in addition to the windlass in the bows. The windlass was used principally for weighing anchor, the capstan for hoisting sails, trimming sheets, working cargo, or warping the vessel. Usually the capstan was an iron casting, but in the early days it was made of wood, a solid cylinder reinforced by fishes or whelps which gave the rope a good bite.

The timber droghers, those big bluff-bowed straight-sheered schooners which removed so much fine white oak or waney pine from the heavily forested shores of the Great Lakes, often had these wooden capstans, with a plank walk " around them on deck. Horses, berthed in a horse box under the staysail boom, were the motive power. Timber capstans could be unshipped by taking the lashings off the crab frame, which was fastened to ring bolts in the deck.

We would like to be able to tell something about the schooner C. K. West, but like the man challenged to sing a song or tell a story, we have to fall back on somebody else's vocal efforts about something else. Perhaps the West was a timber drogher. We hope so, for we want to talk about one of these.

MANY'S the time we've heard in lake forecastles the chanty of

with its rousing chorus borrowed from a fortyniner goldrush chanty.

The timber schooner Bigler then seemed as mythical as Kishmuil's Galley, but study of old shipping registers has since provided confirmation of her existence and corroborated the courses and contemporary references in the song—"her skipper, Cal McKee," "Reed's big warehouse" in Buffalo, alongside which she made fast, Tom Guest's saloon and Garson's clothing store.

The other day in Prince Edward County, fifty years after first hearing Fred Bush sing the song aboard the Albacore of St. Catharines. Schooner Days met Capt. Will Head, a man who knew both the ship and the song and the man who made it, and had sailed in the Bigler herself through the very waters of her lyrical voyage.

The maker, which is the oldest form we have for the word poet, was Mike Fineran of Milwaukee, known from Chicago to the Canal for his emulation of little Tommy Tucker who sang for his supper. Michael's high-pitched warble paid many a bar-bill and worked off many a watch, with a song improvised about the vessel he was in. Other flowers in his garland of melody recalled were The Jenny P. King, commemorating a voyage in an American "barque" in Lake Michigan, and Loss of the Persia, a dismal tragedy of the Upper Lakes. We had a Persia on Lake Ontario, lost about 1894 off Point Peter, but it was not that Persia Fineran immortalized. His song was twenty years earlier, and the event perhaps 20 years earlier still.

The Cruise of the Bigler was ironical, as is apparent from the verse, ungrammatical but pointed:

"We could have passed the whole fleet

If they'd hove to and wait"

The Albacore was slabsided, puffy cheeked, fat-buttocked, blocklike, and very much the mould of the canal locks whose sills and sides she scraped. She had the reputation of being "a good vessel by-the-wind, loaded," which meant that, given wind enough, she might push through the water at eight miles an hour when close-hauled; and she could, with a supreme effort, accomplish twelve miles an hour flying light and running free. She did well to finish any trip up and down Lake Ontario in the same week in which she started it, when she was trading in coal between Toronto and Fair Haven. Allowing three days for loading and unloading, or even four, that meant that she took 72 hours, for a total voyage of 270 miles, so her average speed was less than 4 miles an hour.

Such a vessel as the Albacore was this J. Bigler of Detroit, Mich., even, to the timberports in her taffrail and under her counter, the two masts, 140 feet from heel to truck, mainmast raking, foremast plumb, the box-like cabin house on deck, and the squaresail and raffee on the foremast, to speed her up when running free, and keep her from missing stays when on a wind. Most timber droghers were heavy on the wheel.

The Albacore had long parted with such equipment when the writer sailed in her, although she still boasted a maintopmast staysail or fly-by-night, the ex-jibtopsail of the schooner yacht Oriole II, whose victory over the Idler of Chicago proclaimed her queen of the inland seas. The Bigler however had all her fancy kites when Will Head of Picton shipped in her in June, 1881 —for the longest voyage he or she ever made. It was so long we'll have to let it wait over till next week.

"The Cruise of the Bigler"

(Lake chanty written out by AEmilius Jarvis for his sister when he was in the Edward Blake, timber drogher, in 1875.)

Now, my boys, if you will listen,

I'll sing you a little song,

So sit you down a while here,

I'll not detain you long.

At Milwaukee in October

I chanced to get a "site"

On the timber drogher "Bigler,"

Oh! Watch her! Catch her!

Jump up on her ju-ba-ju!

Oh, give her sheet and let her boil,

The boys'll put her through!

You oughta seen her boiling, boys,

On our passage down to Buffalo

It was on a Sunday morning,

About the hour of ten,

The "Robert Emmett" towed us

We set sail where she left us in

The middle of the Fleet,

The wind was from the southward, so

We had to give her sheet.

But by the night the wind came down

And blew both stiff and strong,

And swiftly through Lake Michigan

The "Bigler" ploughed along;

And far before her bows, boys,

The foaming waves did fling.

With every stitch of canvas set

And her courses wing and wing.

But the wind it came ahead before

And two-and-a-half a day, Sirs,

From these into the Beavers

We kept her to the wind, my boys,

As close as she could lie.

The entrance to the strait,

If they'd hove to to wait.

But we drove them all before us,

The prettiest ever you saw,

Right out into Lake Huron

Through the Straits of Mackinaw.

In Huron Lake we passed Presqu'Isle

And then we bore away,

The wind being fair, we soon flew by

The Isle of Thunder Bay;

But the wind made us close haul her

Upon her starboard tack,

And with a good look out, we made

For the light of Point aux Barques.

We made the light and kept inside

As we'd oft done before;

Both anchors we let go,

And the "Sweepstakes" came along and took

The "Bigler" in tow.

The "Sweepstakes" took us eight in tow,

All of us fore and aft,

She towed us down Lake St. Clair

And stuck us on the flats.

The "Hunter" eased her tow line

To give us some relief,

And the "Bigler" went astern and smashed

Right into the "Maple Leaf."

And then the "Sweepstakes" left us,

Outside the river light,

To roam the broad Lake Erie and

The blustering winds to fight.

The wind being fresh and free, my boys,

We paddled our own canoe,

And pointed her nose for the Dummy on

Her way to Buffalo.

We made the Eau, flew by Long Point,

And down the Canada shore we humped,

Port Colborne on our lee.

What's that looms up ahead, my boys?

We knew, as we drew near,

The light On Buffalo pier.

In Buffalo Creek at last,

And under Reed's big storehouse

The "Bigler" she's made fast;

And in Tom Guest's saloon, boys,

For we are jolly shipmates, and

We soon received our stamps, my boys,

From our skipper, Cal McKee,

And with our dunnage jumped ashore

To go off on a spree.

For Garson's then we started

And got there when we chose,

And the boys they rigged us out again

In a splendid suit of clothes.

Oh! now my song is ended

And I hope it pleases you,

Let's drink to the old "Bigler,"

Her officers and crew.

I hope she'll sail till Kingdom Come, in

Between the port of Buffalo

TIMBER CAPSTAN of two h.p., as used by the draggers

SCHOONER'S WINDLASS—the WHITE OAK'S, as she slowly fell apart in Collins Inlet, six hundred miles by water away from her Oakville birthplace. She was born the same day as the Dominion of Canada, July 1st, 1867. 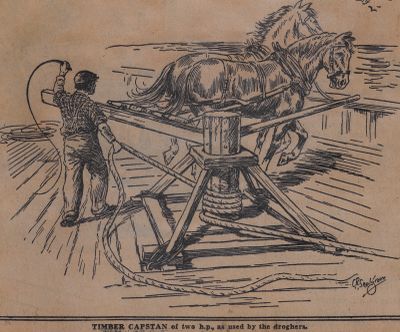