THREE AND A HALF days from Chicago to Buffalo—to be exact. 84 hours and 20 minutes—is the best time so far heard of, under sail on the Great Lakes.

We used to think it wonderful that the old fore-and-after Twilight, a sister or near relation of the Speedwell, had once made this run in eight days, or that the "barque" Malta came from Chicago to Collingwood in 50 hours. A month was what Lake Ontario owners figured on for a passage to and from Chicago; what with headwinds and delays in the canal and rivers. The 3 1/2-day record-breaker had no canalling to do, for Buffalo was beyond the Welland's twenty-six stairsteps, but she did the whole eight hundred and thirty-four miles under sail. Most vessels took a tug through the St. Clair River and lake and the Detroit River, but not this world-breaker.

She was the Frank Perew, one of a fleet named after a family. The Mary Perew, whose picture we give, was another. And there is a Canadian living yet, Capt. Henry Gale, of Sombra, now 79, who was before the mast in the Frank Perew when his father, Capt. Charles Gale, and his elder brother put her through on her famous passage.

His account of it as given recently by Commodore W. E. Phillips, of the Sarnia Club, whose hobby is hobbies, is straightforward. It was in 1875 Henry Gale was then a boy of twelve. They left Chicago with a fresh breeze down Lake Michigan, fair for the Straits of Mackinaw. Here they jibed over, turning the corner into Lake Huron, and the wind then canted more to the westward. They had it fresh and free like the famous Bigler, all the way down to the rivers. At Port Huron a tug picked the Perew up, and Capt. Gale let him hang on, in case he was wanted, but the Perew sailed faster than the tug could steam when they sheeted the gafftopsails home in the smooth water of the St. Ciair. So they towed the tug along sternfirst, keeping her fast, so as to be handy for steerage in such hairpin turns and collision points as South East Bend. But when they got across Lake St. Clair and into the Detroit River the tug cast off and the lightened Perew fairly flew down into Lake Erie.

Here the brave west wind kept on blowing fresh and free, and with every stitch set—including the maintopmast staysail and raffee, fancy sails, but neither of them uncommon in lake schooners—she boiled down to Buffalo. Off the breakwater the wind let go, but the Perew made her own breeze right up to the Watson elevator, scorning the proffered assistance of all the harbor tugs.

She was a fine big three-master, and Capt. Charles Gale did well with her until, after seven years without caulking, she suddenly opened up on him in heavy weather in Lake Michigan, when she had a load of iron ore in her from Escanaba. He ran her for the Foxes, reaching one of those islands just in time to take the bottom in smooth water. The tug Leviathan took the crew to Mackinac, and the sidewheeler Marine City there picked them up and got them down to Detroit. And so home to Cleveland—without the Perew. But she was salvaged and saw further service as a barge.

Capt. Henry Gale, who was also with his father when this shipwreck happened, became a master in sail himself, and holds a square-rigger ticket. He also qualified in steam, both as master and engineer, there was nothing he couldn't do, in both steam and sail. When skipper of the tug W. H. Stone he often "gave himself the bells," acting as captain, engineer, fireman and deckhand after the day's work was done, if he wanted to go home for the night in Sombra when the tug was moored in Marine City after her day's work.

The Stone belonged to the Sicken Lumber Co. Henry Gale also ran the steamer Comfort as a ferry and tugboat at Sombra, and the tug Grace Darling, towing sugar beet barges between Chatham and Wallaceberg. There was nothing he couldn't do in steam or sail, and when he swallowed the anchor thirty-five years ago he made just as good a farmer.

The Frank Perew was finally wrecked on Vermillion Point, Lake Superior, and her crew of seven drowned.

The Nellie Redington of Buffalo, Capt. Andrews, 205 feet long, 33 feet beam, 16 feet depth of hold, 816 tons register, once made a comparable passage of over 800 miles, from a Lake Superior port to Cleveland, in four days. She had the Soo Canal and St. Mary's River to negotiate, for which she took a tug, and she also towed through from Lake Huron to Point Pelee in Lake Erie with the old Humpty Clump, the tug J. P. Clark nicknamed thus from her pegleg skipper. As in the case of the Frank Perew, the towline was said to be in the water all the way, but if the tug was not needed it is strange that she wasted coal all the way down to Point Pelee.

The J. P. Clark capsized in a snowstorm at Windsor, Nov. 9th, 1879, and her cook was drowned, in the same gale which capsized the 60-foot scow schooner Pinta of Port Nelson, off Marigolds Point, below Oakville, and drowned "Bus" Howell, Alex. Mason and William and Joseph Quinn, all of Oakville.

The Nellie Redington passed into Canadian registry in 1914 as a tow barge. She had been built by the same good firm of shipwrights, Quayle and Martin, who built the Frank Perew and her sister, the Mary Elizabeth Perew. The latter, launched in 1861 for Capt. Frank Perew, was 150 feet on the keel, 30 feet beam, 12 feet deep in the hold, and 500 tons register. These three vessels were all larger than any schooners we had on Lake Ontario until after the enlargement of the Welland Canal. Such vessels couldn't come through the old locks.

The Mary Elizabeth Perew was, properly, an object of such local pride that lithographs were made of her in Buffalo by the old firm of Sage Sons and Company, after the style of the famous Currier and Ives clipper ship lithographs in New York. One of the former, reproduced here, shows her bowling along by moonlight, in Lake Huron, with her topgallant sheets let fly and her mizzen gafftopsail half downhauled, either to meet the squall indicated as racing over the waters—or for artistic effect. Thunder Bay Island light is shown gleaming astern. It is noticeable (to or by a shellback) that although the lithograph has all the meticulous accuracy of the period no light screens or sidelights are shown in the fore rigging, but a powerful lantern is gleaming ahead on the bowsprit cap. Red and green sidelights were not in use until after 1850 on salt water, and possibly they came to the lakes even later. The large undivided or "single" square topsail shown on the schooner's foremast was going out of fashion on salt water in 1855, but it persisted on the lakes even twenty years later.

THE "NELLIE REDINGTON" MADE ALMOST AS GOOD TIME BUT USED A TUG FOR 100 MILES.

HIS IS FROM A LITHOGRAPH OF THE "MARY ELIZABETH PEREW." HER SISTER (OR BROTHER) SHIP, THE "FRANK PEREW," HELD A WONDERFUL LAKE RECORD. 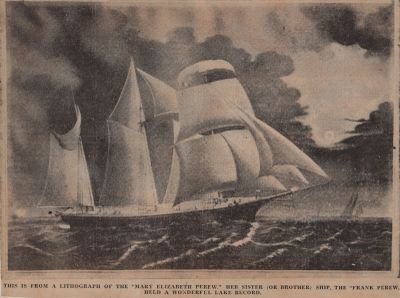